Bury Me In Food

One of my favourite meals are breakfasts…although, I must say I like going out fine dining too, so I guess I can’t really say that. To be honest, there isn’t a meal of the day I don’t like.

Anyways, still fresh from week 2 of my 21-Day Wonder Diet, my friend and I decided to go for a nice, long morning walk. Both of us have already had breakfast but after over an hour of walking and chats, we decided to stop at Bistrot Bistro & Bar for break.

I really liked the decor, it looks Parisian with pendant lighting, exposed brick walls and beautiful booths and timber floors. The service was very attentive (too much so), we were asked if we were ready to order three times in two minutes.

I don’t want to be overly negative, but our food came before our coffees (which we’d ordered first). Not much for adaptation, I thought the food was seriously overpriced. They had no gluten free bread (and no other alternatives) so I ended up paying $10 for 2 poached eggs, and ordered a side of house made beans with ham hock for an additional $7,

The eggs were poached beautifully, the yolks a vibrant orange, but that’s where the good ended. The beans were very sour with the tomatoes, and undercooked, so very hard, salty (with the ham hock) and unappetizing.

My friend had also ordered poached eggs, and her toast came grilled but she said you could taste the grill – and not in a good way. Neither of us was particularly wowed by the boring, unimaginative, overpriced food.

Our coffees were weak, lukewarm and insipid.

Oh yeah, one other criticism, the whole menu was written in jargon. Eg. Nduju $5 – that was apparently a Japanese style salami. Kessler $5 is actually just bacon…couldn’t they have just had that on the menu? Or am I just not ‘refined’ enough for Bistrot Bistro? Probably…which is why I probably won’t go back either. At least not for Brunch. 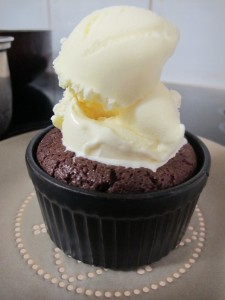 This is seriously the easiest chocolate pudding to make ever…and it tastes soooooo good!  And the servings I’ve listed make just two small 150ml sized ramekins, so it’s perfect for middle of the night cravings (it only takes 15 minutes after all!) or when girlfriends drop by and you’re in search of something sweet.

I wanted to call it Pantry Puddings because the ingredients this recipe calls for are always in my pantry…but my friend laughed at me when I said that, so maybe it’s not the case for everyone?

The first ten times I’ve made this recipe, I used dark chocolate which was very rich (and delicious) and pouring cream into the pot made a rich, delicious chocolate sauce, I’ve also made it with Rolo recently which was less rich and had a nice milk chocolate caramel goo in it.  I probably perfer the orginal version because if I’m after a chocolate hit, I want a REAL hit…not a mild one…but either one is tasty.

– Melt butter and chocolate in a bowl on Medium for about 2 minutes – do it in 30 second bursts and stir afterwards so it’s combined, no whisk needed, I just use a spoon.

– After the chocolate has cooled slightly, add the egg and stir that through until it’s well combined

– Add the flour and the sugar and stir.

– Pour into ramekins and bake for 12 – 15 minutes.  You know it’s ready when the top has puffed up, so check after 12 minutes…if you leave it too long, it’ll be quite cakey and less gooey in the middle…and trust me, you want the goo.